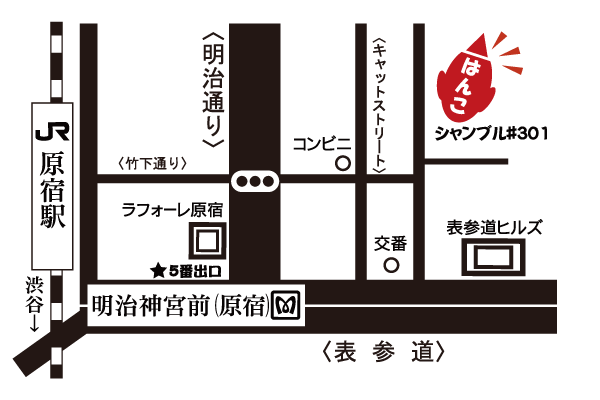 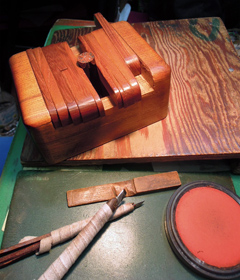 After the 2nd World War, there were over 300 wagon shops in the burned down city around Shibuya Station in Tokyo, selling all kinds of things. Of the shops that remained standing, ours was one of the very few and always attracted many people. That was the beginning of our company. The founder of Todo Insho, Yoshio Arami, carving stamps (Hanko) at his wagon shop.

Then, to save those wagon shops, the first underground shopping mall in Japan, "Shibu-chika", was made and started doing business as Todo Insho in 1957. It has now passed on to 3rd generation artist, Hideki Arami, with unchanged craftsmanship since the very beginning and is still carving at the store located in Shibu-chika.

"Wow, it's hand-carved!"
"This shop is famous, been doing it for a long time."
We still hear comments like that from the people walking by.

We proudly offer our artwork with the spirit of the true Hanko (Seal) artist that are difficult to find these days. 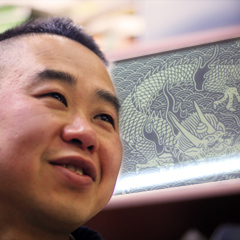 When I was 29 years old, I started working for my father's company, Todo Insho. Without thinking of becoming an artist, I learned how to take orders by watching my parents since they never taught me how.

1993 The Subject Assigned by My Father

One day, my father told me to carve the kanji character "王" meaning "King" on a small tsuge (boxwood) hanko (seal).

On the surface painted with cinnabar ink, I drew the kanji as a mirror image and started rough carving after just learning how to use the machine like a small drill pen. Whoops! Whoops! Just like that, the parts I was supposed to leave on disappeared and my very first hanko (seal) was a disaster!

Then I was told to carve the missing parts with a carving knife and finish it with another knife called a "hanzashi." I also learned at this time that it was not very good to carve characters too perfect as it becomes especially boring with a Koin-tai font.

However, with my first project there was already a mistake in the first step, so the 2nd and 3rd finish did not matter at all. Now that I think back, I should have saved the first and worst artwork of mine. I was usually pretty good at anything I started, however my confidence was totally destroyed.

Three months later, my training to become a hanko artist started. All I did was to draw the base design, show it to my father to be corrected and fix. A never ending loop.

When I drew a name Yamada, with two kanjis meaning mountain and rice field, "山田," he corrected me that the bottom kanji "田" was too big. I measured them with a ruler and proved to him that they were exactly the same size, but he told me that the actual size didn't matter.

As long as it looked bigger, that was not good enough. Each kanji has different characteristics and I finally learned that the balance they have together is the most important thing. Some longhand fonts need to be modified to look straighter as well since hanko should never look crooked.

Surprisingly, after showing drafts to my father and fixing them as he suggested, the design was finally in good balance. I asked him one day if he could tell me where to fix it with just a quick look, but there was no answer from him. Then I could tell I could make the hanko image look better immediately. So I finally got the answer as it comes to you naturally after many years of practice.

He never said much about work but one time he told me that I could be really good someday. That compliment from my father has stayed in my heart to this day.

Soon, we became a team and my role was drawing the first design and rough carving. It still took us 4 days to finish a hanko back then. However this teamwork didn't last for long as my father was getting farsighted. He was putting on two pairs of glasses and also said he could carve with ‘feeling,' but we both knew you can't carve the small details without being able to see.

One day I felt the hanko my father finished didn't look good. It looked different from the original design draft and it gave me a sloppy impression. I suggested to him to start over from the beginning, but he told me the customer wouldn't mind. I scolded him that it was wrong that we didn't do our best. It was not what the customers would like. I insisted that he start over again but he replied, "Don't order me around," and left.

Now, I was all by myself! But I was happy that I could make a better hanko to give to the customer. Since then, I sometimes found some imperfections of what he created and I tried to let him go home early and fix them after he was gone.

After I was all by myself, I recognized my way of carving is different from the standard way. That is, I am slower than average.

The founder, my grandfather burned his left hand when he was still little and could not Open what? However, he was apprenticed as a hanko artist since a little boy and became a very skilled artist himself.

Still the way he carved was the way a handicapped person would do it. My father learned from him and I learned the way my father did, so it was transferred as an irregular way.

One day, I tried to fix it and learned from another hanko artist. But the result was all the uniqueness vanished and it didn't look like my work at all. Since then I chose to be slower.

When I was still an ordinary hanko artist, a customer I worked very hard for commented "For the hanko artist, it must be very important to have the technique to carve, but I think to have the ‘right spirit' is more important. And I think you have it, so I believe you will succeed."
That message became my treasure.
Then the idea of carving ‘motif' hanko came to me and I started doing it for only friends and repeated customers.

The turning point soon arrived. A famous TV comedian, Ken Shimura came to my shop to report about 'good old times' remaining in Shibuya.
I designed one of his comedy characters, called baka-tono-sama (meaning dumb shogun) in his kanji and carved a motif hanko for him.
He asked me if I did all the work myself and I answered "Yes," Just what I wanted to broadcast!
They introduced me as a unique hanko artist who loved to talk. The TV show became almost like my own commercial.
The motif hanko was also introduced and now I could not refuse to take motif hanko orders from anyone.

One or two more orders came every day after the show and my hand started hurting. It was almost becoming tenosynovitis. Do you mean arthritis?
I was told by a customer, "It's very common to get tenosynovitis for professionals who use their hands. You have only two choices. Continue carving with lots with pain, or take fewer orders and create products you are satisfied with. Choose the one that gives you less stress."
I thought that choosing a work style without any stress could only be done by a very strong person. However, I stopped taking rush orders.

I became the model of a comic character written by Masane Kamoi, called, "Your roof is my floor" with my real name, "Arami" and my shop name "Todo Insho".
In the story, I was carving a motif hanko, so many of the fans came to order from all over Japan.
The comic still still continues and I show up in every book as a sub-main character.

They featured me as an artist on the website for a month.
Throughout the interview, I was shown as the artist who creates products that exceeded customer's expectations, unlike the artist who only desires to express something.

At 6 pm on New Year's Day, Tokyo FM interviewed me for 30 minutes.
In March, production orders hit a record of 60!
However, after the tsunami? disaster and the loss of long distance customers, the orders came back down to 30, the normal number.

In February, production orders increased to over 70. This means the waiting time is now about a month. I don't see any other events or reasons, so this fact tells me that there aren't many hanko shops that make excellent hanko. Now I believe is the time to start providing hanko to the rest of the world. If my hanko will be sold in a society where there is no custom or history to use hanko, the future of the hanko artists will be bright. It takes at least 10 years to become one, so it is quite possible to make a living out of this.

In closing, I would like to repeat what I learned from a customer:


"Now is the only result of the past. What you do now will be the result in the future.
So you must work hard NOW."

I recently had an interview with Live Tokyo. They are introducing Japanese culture in short YouTube videos, called "Play Tokyo" for visitors from abroad.
The interview was about 2 hours long but they edited to 2 minutes.

In 2018, I received orders from four groups of tourists from abroad. They were artists, such as a calligrapher from Switzerland, and a lady from France who wanted a 'motif' hanko for her handmade postcards.
There were no orders in 2017, so I assumed demand was increasing. As of August, 2019, there were already 8 international orders.

The most interesting encounter was from a woman from New York who was traveling the world and staying in each city for over a month. She writes poetic stories on postcards created with the collaboration of other local artists (postcardsfromjenna.com). For some reason, she picked me from Tokyo and I carved a large "motif" hanko for her. Then one of her customers who liked the stamped image visited me to order one of their own.

I have the impression that many artists around the world have started to like "Rakkan-in," or hanko, to be stamped on their artwork. If international orders keep increasing, who knows, maybe I'll become a famous artist myself someday...?